Ludwig has been manufacturing and providing drums for musicians for over a century now – and even the Ludwig Junior drum set products are pretty in demand for beginner drummers. Originally started by the sons of German immigrants to America, Ludwig began by making bass drum pedals for the growing music industry at the time. They soon went on to manufacture snare drums and timpani sets for orchestras around the world. Their drum kits have been played by everyone from Ringo Starr to John Bonham.

Today you’ll find Ludwig drum sets in practically every drum store in the world. They cater to all styles and playing levels, from total beginners to seasoned professionals.

In this article we will look at some models of Ludwig kits in several different price categories and examine how they are suited to the younger type of drummer.

Although these junior drums sets look a whole lot like a real drum set you may see in any band, there are quite a few differences. Below are the most common: 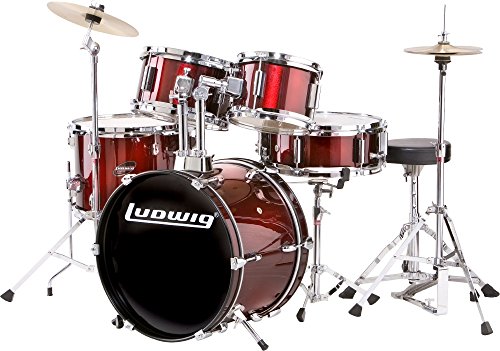 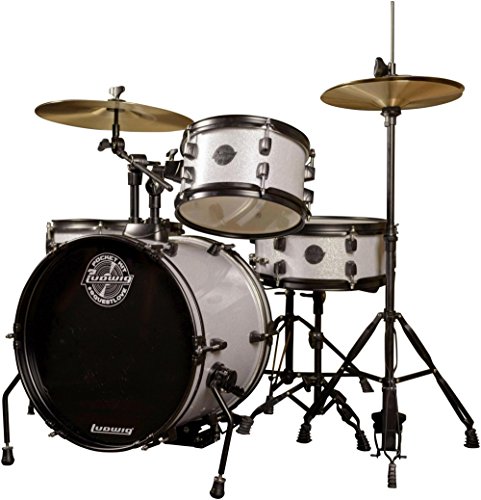 The Ludwig Junior Outfit Drum Set is a 5-piece drum set that is a smaller sized drum set aimed at drummers from any age up to around 12. It has smaller drum sizes so can be easily configured to suit small kids. The bass drum is 16 inches which is a lot smaller than on most full-sized drum sets. The smaller bass drum also holds two toms which are 8 and 10 inch in. diameter. You can easily lower the toms to suit the smaller player which means they can comfortably play this kit without too much hassle.

Suggested Age Range: 3-9 years, but can be used by older children that are small in size
Color: Available in several color options

The floor tom is mounted on three legs so it can be raised or lowered and positioned easily for playing purposes. The snare is smaller than a standard snare which makes it a more suitable playing experience for younger kids.

For the price point buyers note that the sound is excellent and the overall quality is good. There are some options for fine tuning the sounds by tuning the drum heads which is a nice feature for a junior drum set.

Here is a great video of an 8 year old playing on this set so you can get a feel for the sound and size this drum set offers!

For older kids you could look to either the Ludwig Pocket Kit which is a great starter drum kit. The Pocket Kit is a four-piece drum set with cymbals and hardware such as stands.

The Pocket Kit is a tidy little setup and retails for under $300 in most places. It’s a better standard of kit to the Junior Outfit drum set with a sturdier build and stronger fittings. This kit is closer to a full-size professional drum set and could suit young teenagers looking to play their first live gig.

The Ludwig Pocket kit was actually co-developed with Ahmir “Questlove” Thompson, a famous percussionist who wanted to meet the needs of the younger crowd with a professional styled set.

Suggested Age Range: 4-10 years, but can be used by older children that are small in size
Color: available in several color options

Most of the sentiment on the web is positive with only a few mentions of some related quality issues. But most are noting that the the Pocket Drum set is a good value and sound for the younger drummer.

A great video of a big boy playing the Ludwig Pocket Kit!

Ludwig Drums was founded in 1909 by William F. and Theobold Ludwig, in the same year they would introduce the first Ludwig bass drum pedal. Not too long after they introduced their very first Timpani model drum. Sadly Thoebold passes away in 1918 – the year of the great flu epidemic.  During the 1920’s Ludwig would continue to introduce new products including their Black Beauty Snare Drum which is still sold today and is known as one of the most sought after snare drums in the industry.

Their big growth was in the 1960’s when one of their guitars debuted on The Ed Sullivan Show – with an appearance by the Beatle’s! Ringo Starr was playing the drums when front and center on the bass drum was the Ludwig logo for millions of people to see. That free publicity quickly doubled their sales to the tune of roughly $13 million dollars – and the rest they say is history. You can learn more about Ludwig Drums here.

Choose the Ludwig kit that is right for your child!